After being interested in the men of the defensive line, those who stand behind them. Once the most important men in defenses had to stop the run, the role of linebackers has evolved in the 21st century. If tackling remains at the top of their job descriptions, these second-curtain players must now also be competent in coverage, in order to be able to stay on the field during the three attempts.

He is the man in the second curtain who aligns himself in the axis of the field. He must be an intelligent player because in the middle, he must be able to quickly recognize attacking play and react to it. Due to his preferential position, he is most often the defender equipped with a helmet with an earpiece, in order to receive the instructions of the defensive coordinator, to then transmit them to his teammates. Example : Bobby Wagner (Seahawks).

The “strong side” is where there are the most offensive players lined up. To simplify, the side where the opposing tight-end is aligned (in 60% of cases, attacks only align a TE, see the article on offensive formations here). When the attack aligns 2 tight-ends then, it is the positioning of the runner which determines where the “strong side” is. This player must be strong because the presence of the tight-end on one side often means that he will block, in pass protection or to help the ground game: the Sat must therefore be able to beat him physically. The role of tight-ends having evolved, with now more reception skills, this linebacker must also be able to provide cover for the latter. Finally, this linebacker must have pass rush skills (penetrating the pocket to put pressure on the quarterback). Example : Anthony Barr (Vikings).

Opposite of the strong side, the “weak side”. Where there are fewer offensive players lined up. This linebacker is usually the weakest of the three but also the fastest. Its roles are variable (see below) but the main one is to be able to pursue a runner from one side to the other. Example : matt milano (Bills).

The first names Mike, Sam and Will use the first letter of their respective positions. To call defensive plays, the defensive coordinator as well as the linebacker with the helmet equipped, cannot make sentences. So, designating these linebackers by name rather than “the right or left linebacker” is faster and also more precise: for example the call “Mike Strong”, will designate an assignment to this linebacker to attack the pocket from the strong side, and this term is much more effective than “the middle linebacker must attack to his left”. 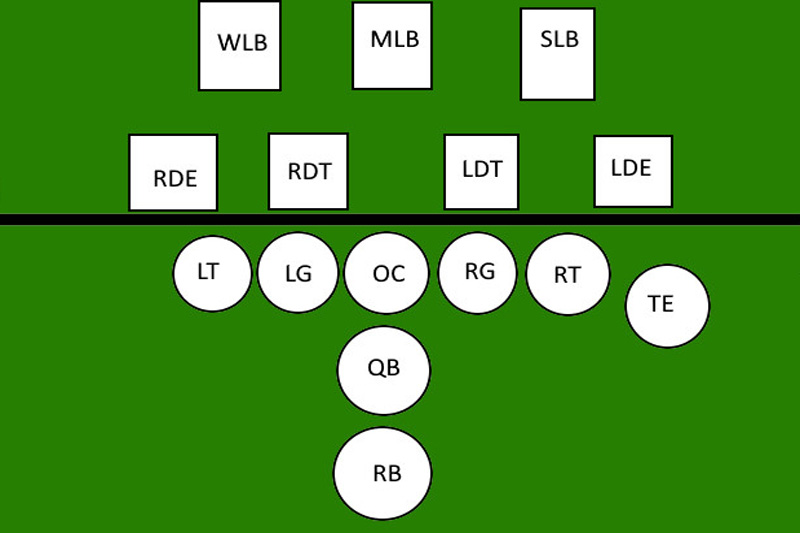 Without going into the various possible variations, let’s summarize the diagrams in just two: defense in 43 or in 34. The first therefore offers 4 players on the defensive line and therefore 3 linebackers. We find there, on the second defensive curtain, the Mike and by and others Sam and Will. In a defense organized in 34, there are therefore 4 linebackers behind the 3 defensive linemen. In this case, two linebackers are in charge of the midfield (Inside Linebackers) and the organization in relation to the strong or weak sides is the same as described above. Example : Devin Bush and Joe Schobert (Steelers).

On the sides, in a defense in 34, there are therefore 2 outside linebackers (Outside Linebackers). These generally have the primary function of putting pressure on the opposing quarterback: these are “Edge Rushers” (which overflow from the edge). Some of these players always evolve on the same side of the defense, because they feel more at ease there and have developed their automatisms there. Sometimes these players change sides, depending on the position of the opposing tight-end or to change the direct opponent in the match. Example : Khalil Mack and Robert Quinn (Bears).

Put pressure on the opposing quarterback and if possible, put him on the ground (sack). This role is essentially that of outside linebackers in a defense organized in 34. Of course, in a 43 system, an outside linebacker (Sam or Will) can also occasionally receive this assignment. Especially the Sam like Haason Reddick (Panthers).

Stop the opponent’s ground game. This is the main mission of the middle linebacker (or two). This is why this player was the most important in defenses before the 2000s and why if he is still an essential player today, his role tends to be reduced with NFL attacks increasingly oriented towards aerial play. As described above, the Will with his speed also has a big role to play in stopping opposing runners while the Sam, struggling with the opposing tight-end, tries to prevent blocks for the ground game from his listed (Edge Setter). To summarize, if the Mike remains the main linebacker for the “run stop”, the 3 are involved (or the 2 ILBs in a diagram in 34). Example : Roquan-Smith (Bears)

This term refers to the action of attacking the pocket with more players than those in the first curtain. The goal is to be able to overflow the offensive line and panic the opposing quarterback, because as this term with a military reference suggests, the danger comes from everywhere at the same time because the defensive players are in excess. The linebackers are not the only players who can receive this assignment (safety and cornerback can also fulfill this role occasionally) but, more often than not one or two of these linebackers will lend a hand to the defensive linemen and even, use the fight of the latter with the players of the offensive line, to infiltrate a breach. And thus reach the quarterback to inflict a sack on him. Example : Micah Parsons (Cowboys).

For about fifteen years and this in crescendo, the linebackers must have skills in coverage. This is why more and more players with a past as a safety are converted to linebacker. Shaq Thompson (Panthers) is one of the first recent examples of this movement, Isaiah Simmons (Cardinals) one of the last and DeMarvion Overshown (University of Texas) the next to join the NFL. On the 3rd attempt, the probability that the opponent will attack from the air, and not on the ground, is very high. This is why during these 3rd downs, an additional defensive back most often replaces a linebacker. To stay on the field during the 3 attempts, a linebacker must therefore be competent in coverage. Example : Kyle Van Noy (Patriots).

Some linebackers have a full panoply, while others are mostly competent in a particular area. None can have “elite” qualities in the 4 components described above. So, let’s have fun composing this ultimate player, like Frankenstein’s monster.

Our creature would have the quality in tackles of Bobby Wagner (Seahawks), the intervention speed of Devin White (Buccaneers), the blanket skill of Eric Kendricks (Vikings) or Fred Warner (49ers), the ability to overflow from outside TJ Watt (Steelers) and the expertise to snatch balls from opposing hands (fumbles) of Darius Leonard (Colts).