From the announcement in 2019 of a series centered on the mythical character of Obi-Wan Kenobi and the return of actors from episode 3 of Star Wars like Ewan McGregor and Hayden Christensen, fans of the galactic saga are in the starting blocks. Were we going to witness a battle of anthology again as in Revenge of the Sith ? How was Obi-Wan going to become the lonely hermit who meets grown-up Luke in Episode 4? Dsince the release of the first trailer in March 2022, the scenario for the Disney+ mini-series is taking shape.

Armed with his blue lightsaber and dressed in his homespun, Obi-Wan Kenobi returns May 27 for six episodes. Already arousing the curiosity of fans, the story will take place ten years after the events told in Revenge of the Sith released in theaters in 2005. The Galactic Empire replaced the Old Republic and almost all members of the Jedi Order were annihilated. Obi-Wan and Master Yoda are the only survivors of the purge and try to hide to survive. Before looking at this new work, we summarize what you need to know, in five steps, about the character of the great master swordsman.

1Trained by one of the greatest masters in “The Phantom Menace”

Before being the strong and powerful character that we all know, Obi-Wan had to go through training at the Jedi Academy on the capital planet of the Galactic Republic: Coruscant. After finishing his initial apprenticeship, Obi-Wan Kenobi is assigned as apprentice to master Qui-Gon Jinn. Its first and only appearance dates from the release of episode 1 in 1999: The Phantom Menace. Accompanied by his mentor, considered among his own as one of the most formidable swordsmen of his promotion, Kenobi forged himself and traveled entire planets and faced many enemies of all kinds. Especially during events transcribed in the extended universe of comics Star Wars.

He will meet later Anakin Skywalker, young inhabitant of the planet Tatooine who sees his destiny change thanks to the master swordsman. Qui-Gon saw in him the chosen one, a recurring legend in this universe which would predict the arrival of a powerful Jedi supposed to restore balance to the Force. Only after his master’s death caused by the red blade of the Sith Darth Maul will Obi-Wan be given full responsibility for the little boy. He would later become his mentor.

2An accomplished warlord during “The Clone Wars”

Although an expert wielder of the wise arts of the Force, Kenobi was also a warlord. More specifically during the time of the Clone Wars, a galactic conflict that spanned between Episode II and Episode III of the saga. During this war, Obi-Wan was given the rank of general to lead the army of the Clones, official fighters of the Galactic Republic. She directly confronts the Separatist Alliance, a kind of protest regime rejecting the power supported by the Jedi Order. 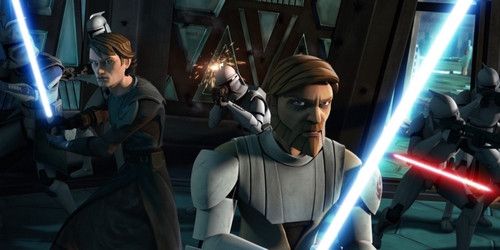 During these adventures, Obi-Wan had to face many enemies alongside his apprentice Anakin Skywalker. Between confrontations with Dark Force tamers, civil wars, and the return of his late master’s killer, Kenobi has come close to death several times. Making him ever stronger and more experienced in combat. It’s in the series The Clone Wars (2008), composed of seven seasons, which retraces in detail the various events of this galactic war.

3The trainer, friend and then executioner of Anakin Skywalker in “Revenge of the Sith”

Obi-Wan Kenobi maintained a special bond with his apprentice and friend Anakin Skywalker, who became a Jedi Knight of the Republic after episode II of the saga: Attack of the Clones. Over time, thehe pair formed, consolidated and proved to be inseparable. Until the final outcome of Revenge of the Sith and Anakin’s shift to the dark side.

The two brothers in arms found themselves exchanging blows in the dantesque combat on the volcanic planet Mustafar. Anakin emerged disfigured and burned while Obi-Wan, filled with remorse and sadness, had to abandon his comrade in arms. Consumed by hatred and resentment.

And it is at this precise moment that the “dark age” of the franchise begins: the Purge of the Jedi, the advent of the Empire and the new dark lord of the Sith: Darth Vader. Alone, distraught, and completely traumatized by the events, Obi-Wan found himself wandering the sandy lands of Tatooine. Safe from dark forces and his new war leader.

Obi-Wan, who became Ben Kenobi for the sake of anonymity, has also given himself a mission: to closely monitor the young Luke Skywalker, hidden son of Darth Vader. Growing old to face the Empire and its army, the Jedi master remains hopeful. Waiting for the moment to be able to train the young boy so that he can fight at his side.

The series suggests that one will develop his relationship with the child, although they do not actually bond in the fourth installment: A New Hope, set 19 years after Episode III. Obi-Wan was then played by British actor Alec Guinness, from whom Ewan McGregor admits to having been inspired a lot in the Disney+ series.

5The guide, killed by Darth Vader’s saber in “A New Hope”

It’s no secret that Obi-Wan will perish by Vader’s red lightsaber in single combat in Episode 4 of the franchise. All the interest of the series Obi-Wan Kenobi will therefore be to explore the relationship maintained by these two characters just before this disastrous outcome. On the one hand: Vader’s hatred of Obi-Wan, who demands revenge from the one who persecuted him and abandoned him to his own fate. On the other hand, the hope of Kenobi, aging Jedi master, ready to do anything to save the galaxy which has descended into chaos, despite having failed to bring Anakin back to the path of reason. 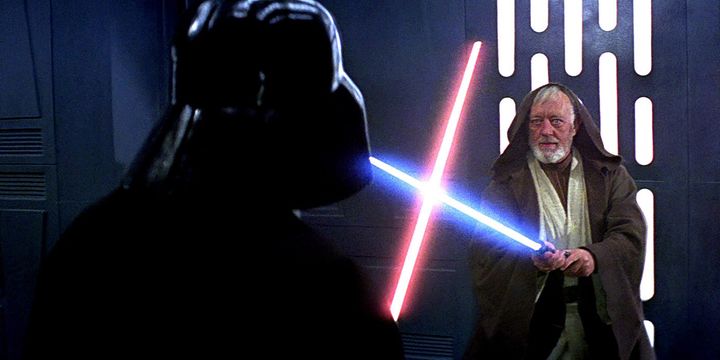 Obi-Wan, in A New Hope, faces off against Darth Vader for the last time in a doomed final battle. (LUCASFILMS LTD / THE WALT DISNEY COMPANY)

Disney now has all the cards in hand to deliver an exhilarating new narrative for fans. After the disappointing attempt to revive the iconic character of Boba Fett in his eponymous series. Obi-Wan Kenobi, which comes out Friday, May 27, promises in any case to exploit a little more this character so iconic of this cinematographic saga.