After the parody of The Bachelor in The flameJonathan Cohen is back on Canal+ in The Flambeau: the adventurers of Chupacabra, who is making fun of Koh-Lanta this time.

Marc – sorry, MAAAAAAARC – has returned to Canal and traded his broken-hearted villa for a desert island to join the 15 other candidates in the Torch, a new reality show inspired by Koh Lanta which promises the winner the exceptional sum of… 450 euros. But the paradisiacal setting may well lend itself to it, it is clear thatafter three episodes, the series co-created by Jonathan Cohen is still struggling to rekindle the flame.

The first season was a successful pastiche of the Bachelor, but above all a comic gem that benefited from hilarious writing, a tasty politically incorrect tone, a rhythm without downtime, a referenced realization and protagonists more crazy than each other. And if the start of this second season still benefits from lines and sequences that are already cult – the author of these lines having lost her jaw because of Doctor Juiphe by Pierre Niney -, the scenario escapes less heaviness with a less sought-after schoolboy humor.

The first season may have raised the expectations and demands of the audience, but The torch seems for the moment victim of its own ambitions with a concept of emission which required more means. If the realization still holds the road when it diverts the codes of the genre, production is more brokeespecially during the trials, while the plot ridicules the characters more than it mocks the concept of the show.

The narration, which no longer revolves entirely around Marc, is more disjointed. Ultra caricatural profiles – but not necessarily more than in The flame – are more annoying than amusing, especially those who struggle to exist independently of the valve they represent. We particularly think of Laura Felpin’s hippie which consists of being relaxed and dirty, or the conspiratorial of Thomas Scimeca who is content to answer “as if by chance” to everything he is told 40 times per episode. Not to mention the frustration of not seeing Vincent Dedienne imitate Denis Brognart with his tongue-in-cheek humor, in favor of an overly relaxed Jérôme Commandeur. 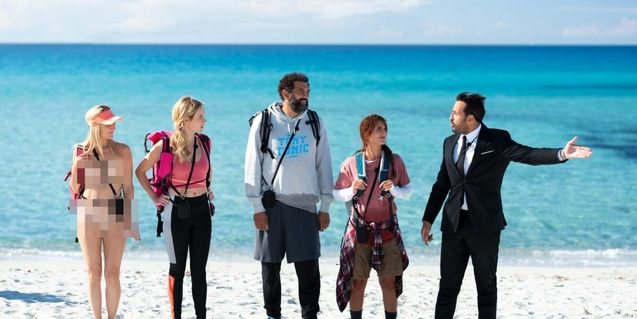 You don’t change a winning team…

The strength of Torch is therefore essentially based on the remains of The flame, its casting and its narrative arcs: Marc’s hatred of Anne, the ambiguous relationship between Soraya and Marina or the strong comeback of Leïla Bekhti as Alexandra. The character of Géraldine Nakache who has become a reaction cop and that of Adèle Exarchopoulos (whose comic potential has never been so well exploited) deserve their own spin-off as they make the rest of the cast incidental, in particular Marc . The former pilot, who certainly delivers less punchlines, is for the moment less stupid than mean, while his underlying candor and fragility were essential cogs in his characterization.

So hoping that the next episodes will correct the shot with a more harmonious cast, more consistent narrative arcs for newcomers, a more convincing pastiche of the codes of survival reality TV and a less limited realization. And even if the season only improves a few points, it will already have enough to make us look forward to a potential season 3 on Top Chef, The Angels of Reality TV, Star Academy or Beijing Express.